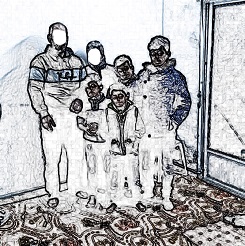 The family is from Homs (area in N. Syria). Along with his wife and 4 sons, they crossed the border to Jordan and stayed in a camp for twenty days. They got sick with scabies when they were in the camp because of the bad living conditions. After leaving the camp they no longer suffered from this. When they left the camp came to live in Mahata, just down the street from the church. The husband had a psychological shock from the war, until now he never leaves the house and refuses to go to the doctors and take medicines. He formerly worked as a driver back in Syria. He tried to work as a cleaner for a while, but wasn’t able to continue.