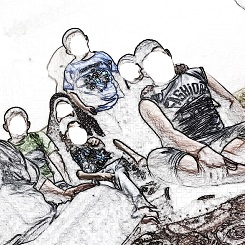 The family is from Homs, an area in Northern Syria. Their family of 7 fled the civil war of Syria to come to Jordan 4 years ago. The husband earned income in Syria by selling livestock from his house. Now he is not working. He has some problems with his eyes and is not able to see well. The oldest son he was only 10 years old when they all came to Jordan. He had an injury in his leg from the war, but now he is doing fine. The other son has a problem in his left ear he can’t hear very well, they did a surgery for him, but it didn’t work.