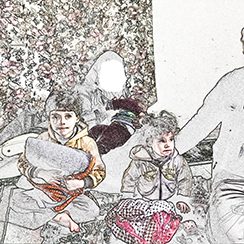 Mohammad, his wife, Ghada, and his infant son, Hani, left their home in Homs, Syria in 2013, going to Zatari camp for two days to register and then to the Mahata area of Amman, Jordan. His brother had been taken prisoner by the Syrian government forces, but eventually escaped to Lebanon. After his capture, Mohammad and his family sought safety in Jordan. He still has parents and siblings in Syria. He has completed the 6th grade, and his wife completed the 5th grade.Like many Syrian refugees, father Mohammad is not allowed to work in Jordan; if he does, the authorities may send him back to Syria. Since coming to Jordan, they have had two more children, daughter Rataj and son, Ammar. He has no preference where he will be sent, but wants safety and opportunity for his three children.