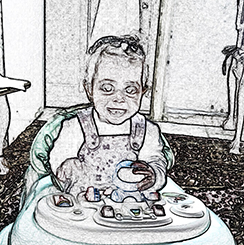 Mohamad Albasti and Dnia Almasri and their two children left Homs, Syria in 2013 after their home was raided, with the Syrian military looking for any males to abduct. Mohamad and all the men from their area of the neighborhood were taken, and the children have been very frightened of the noisy guns and bombs. Their third child was born in Jordan. Her oldest son is very afraid of everything. He was going to first grade, but the teacher beat him and now he is afraid of anything where there are other children. He won’t even go to the library time at the church. Mohamad was a house painter in Syria, but now looks for whatever he can sell for vendors, though it is illegal for him to work.