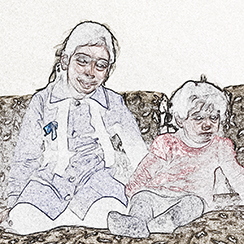 Salem and his wife Shams and their four children left Syria in 2013 with their 4 children (a fifth was born in Jordan, 2015) from their home in Dir Balba, Homs, Syria with only the clothes on their backs. He was a day worker in Syria, and has tried to work in Jordan but has back problems and even though illegal for him to work, he usually cannot find work. They hope to return to Syria if it is safe.