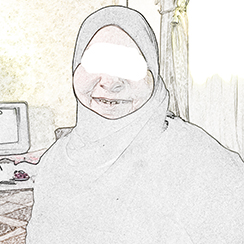 After the Syrian military took their sons (her husband was ill), Ahmad and Khaldia escaped with their family in  2013, fleeing to Jordan with only the clothes on their backs. Her youngest son is now 21 and lives in the home with his parents.  They are from Dir Balba, a village outside of Homs, Syria. She described guns and bombs everywhere, and everyone was very afraid. Their 21 year old son lives with them now and works in a store (illegally), the only provider since her husband is ill. They worry that something will happen to the son or he may be sick, and then they have no one to help them.