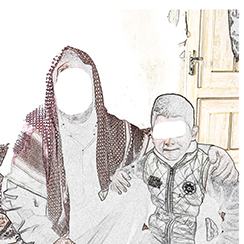 Sulaiman left Syria with his wife Noufa, and their daughters and grandchildren with only the clothes on their backs in 2013,  just in time to watch their home get bombed and blow up in flames. As they were walking from their neighborhood, they turned around as the bombs destroyed the entire neighborhood. There is nothing left but rubble. He was a farmer in their village and is unable to work any longer due to back injuries. His wife has developed mental illness (she no longer has her mind) as a result of the war, bombing, guns, etc. So he is left to care for his two pre-teen sons as well as help his daughter with her five children in the home.