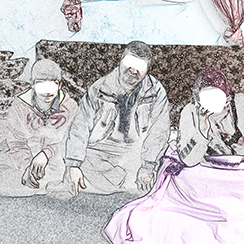 Nathem and his wife Nofa lived on the family’s farm in a village outside Homs, Syria. He was born with a leg deformity, with one leg 4 inches shorter than the other. He has a lot of pain and difficulty walking. He helped with the farm, but mostly his brothers did the work. Nathem and his family decided to come to Jordan in 2013 (two years into the four-year occupation of Syria by ISIS) because the four children were so afraid of all the bombing and guns. They went to Damascus and got a bus to the border, and then stayed in the Zatari refugee camp for ten days. Then they came to Mahata, an area of Amman, Jordan’s capital city where they have lived since. He cannot work legally in Jordan, and his disability further prevents him from doing any type of manual labor. He worries constantly about paying the rent and keeping his family together.