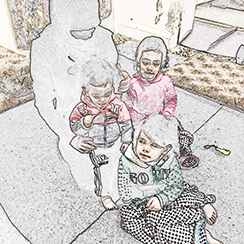 In 2012, when their daughter, Aisha was only 10 months old, a bomb was thrown into their home, and the walls came crashing down covering their child. Fortunately, the baby had been wrapped in many blankets and once they were able to dig through the rubble, they found her still alive. Tarek was imprisoned for 8 months, enduring torture to provide information that he didn’t have.  They have lived in the Mahata area of Amman, Jordan since 2012. Because of his injuries, Tarek cannot do many jobs, and he cannot work legally, so they are struggling to pay rent, now several months behind. They are thankful they can drink water from their tap in their apartment without buying it, as they had to do in Syria.