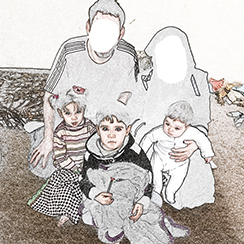 Ahmad, lost his ability to work when he was captured by the Syrian government forces three times, where he was tortured, a knife slicing his leg through the muscle just below the knee, and injuring his ear, resulting in hearing loss. He and his wife Aisha left Syria in 2013 left their home in Homs, hiding in abandoned farm buildings, eating the remaining food products left in the fields after harvest, and other 'weeds'. They reached the Zatari refugee camp to register, but did not even stay overnight because Aisha was pregnant, so they got emergency relief to leave and began living in Mahata in November 2013. They now have 3 children and face a desperate future.